Shopping Cart
Your Cart is Empty
Quantity:
Subtotal
Taxes
Shipping
Total
There was an error with PayPalClick here to try again

Thank you for your business!You should be receiving an order confirmation from Paypal shortly.Exit Shopping Cart

Click the links below to view other pages regarding the

They're headed this way!

Hide the Horses! Women & Children, too!

Those words of warning spread throughout southern Indiana and as far north as Indianapolis in the heat of early July 1863. The Civil War was headed north into Indiana under the command of General John Hunt Morgan and his band of 2,000 cavalrymen. They were known as Morgan's Raiders!

On July 8, 1863, after stealing two northern steamboats, the J.T. McCombs and the Alice Dean, Morgan's Raiders crossed the Ohio River from Brandenburg, Kentucky, into Harrison County, Indiana. The Indiana Home Guard attempted to ward off the invaders near Mauckport, Indiana, but soon retreated north to Corydon.

On July 9th, a battle was fought south of Corydon in Harrison County. This was the only Civil War battle to take place in Indiana. Morgan's troops attacked on foot and after only thirty minutes. Morgan captured 450 Indiana soldiers and then released them after they promised not to fight again. Thereafter the Raiders spent several hours robbing the people and the businesses. 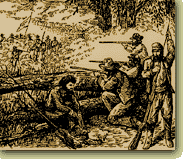 Morgan and his men moved north to Palmyra where they camped for the night. The next day they split into three columns to look for food and fresh horses. The Raiders gathered together before they approached Salem in Washington County. There were some Hoosiers at Salem who thought they might be able to defeat Morgan and his men. When they saw the southern cavalrymen coming up the road toward the courthouse, they immediately scattered. Morgan's men looted the town and for the price of $1,000 from each miller promised not to destroy the mills. Before the Rebels left Salem, they burned the depot, three railroad cars, the water tower and two railroad bridges. They then headed east to Canton where they wrecked more railroad tracks and tore down telegraph wires.

By the night of July 10, the Raiders reached Vienna, Scott County. Still drunk from quantities of whiskey they drank in Salem, the unruly men began a new tactic of ransacking farmers' homes. Searching for money, they ripped up bedding and carpets and broke clocks and mirrors. As darkness fell, most of the Raiders turned toward Lexington, which at that time was the county seat of Scott County. At the cemetery some elderly men and young boys prepared to defend the town with an old cannon, but on seeing Morgan's troops, quickly dispersed. One little Lexington girl, afraid the invaders would steal her pony, hid the animal behind a piano in her home. 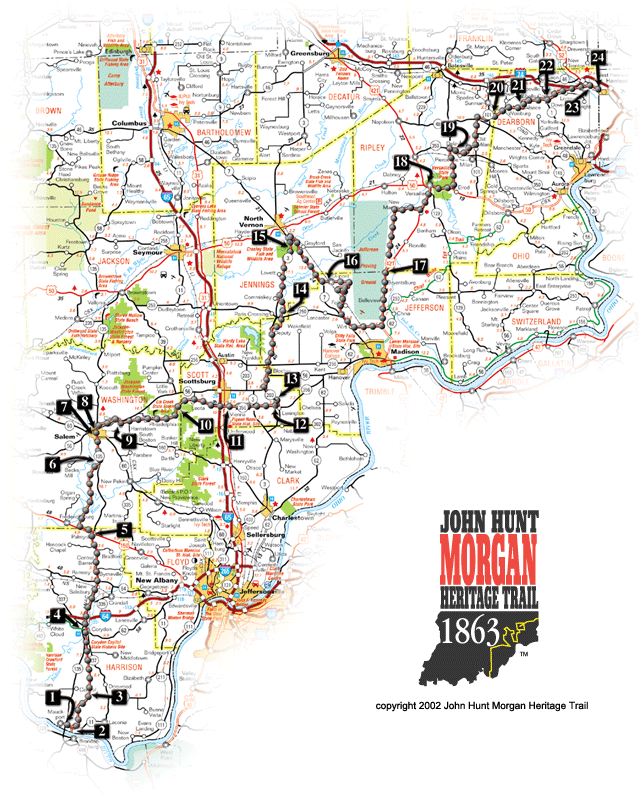 The main column continued through Deputy in Jefferson County and on into Paris in Jennings County. Late on July 11, the main line moved north toward Vernon. But in Vernon, the Indiana Legion and other volunteer soldiers were ready for the invaders.

Morgan sent a cavalryman carrying a white flag to demand the town's surrender. The Home Guard leader refused and as Morgan's flag bearer returned, the town's defense was strengthened with the arrival of more soldiers. Morgan received a message requesting a two-hour delay in attack so Vernon's women and children could leave for safety. Morgan, realizing his exhausted troops were being closely followed by Union troops, took the tow hours to escape.

In the midnight hour of Saturday, July 11, the Raiders entered Dupont, Jefferson County, and were able to catch a few hours of rest before devouring an early breakfast at the expense of almost every homestead. Two thousand hams were stolen from Frank Mayfield's meat packing plant as well as $1,600 worth of merchandise.

The Raiders left town with hams dangling from their saddles and crossed what is not the Jefferson Proving Ground, heading toward Rexville in Ripley County.

Morgan sent a group toward Holton, but the main column continued to Versailles, county seat of Ripley County. Versailles surrendered without a shot being fired. The defending Union Guards were imprisoned in the courthouse and their guns broken over the corner edges of the building. Five thousand dollars was stolen from the county treasury. A group of the freebooters invaded the local Masonic Lodge and took the Lodge's silver coin jewelry. Morgan, himself a Mason, ordered the jewels returned and punished the thievery of his own men. The column split as the Raiders made their way to Pierceville.

The last Indiana county the Raiders terrorized was Dearborn. At Weisburg telegraph wires were cut and a bridge burned as the Raiders made their way to New Alsace. By midday the troops left town, traveled through Dover and Logan and came to the Whitewater River at West Harrison. The Raiders crossed the Whitewater on a heavy oak bridge that spanned the river. Two hours later the pursuing Union troops came to the smoldering, oak bridge, which Morgan's Raiders had burned after crossing the Ohio state line.

For more detailed information ask for your copy of the Students' Tour Guide or click on the brochure above to order your copy today.

Click the links below to view other pages regarding the